A Menopausal Detective on a Slippery Slope - Prologue

This is an experiment. You know that I am a writer, right?
Most writers have their writings on a shelf, or in their computer, or in a little notebook. Until they get it published.
Writing is an ongoing process. You try, you throw away, you try again.
Well, I'm trying. This is a try-out. This is YOUR try-out, too!
Let me know what you think about this? 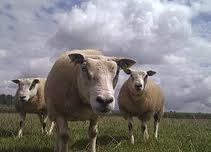 Prologue
The accidental killer looked around him, sweat rolling from his hairline along his brow in rivulets. His hands scrabbling through the sand and sheep droppings, he tried to find enough loose stones to weigh down the heavy-duty garbage bag in front of him. He swore when knife sharp shards of oyster cut his fingers. In the distance he heard the sound of an approaching car.
To his left, a goose honked sleepily. Ever faster he searched for rocks and stones. Away, he had to get as far away as possible, before he was seen!
He held his breath when the car passed him, the sheen of headlights seen just above the dyke, and then moving down the narrow road. When he heard an asthmatic cough behind him, he froze. His bowels threatened to loosen and once more he held his breath, pressing his buttocks together. Again the cough, but this time it sounded less human and more animal. His overheated brain provided him with an answer. Sheep droppings – that meant sheep.
As soon as he couldn’t find any more ballast, he tied a tie-wrap around the stiff plastic of the bag, wrestling with its folds. Scrambling up, he dragged the dead weight towards the waterline.
Christ, it was heavy going! The blue plastic made a tearing noise, and suddenly all round him there came an alarmed honking and the flapping of wings as the Canadian and Grey Geese woke up and tried to get away from the danger. He doubled his efforts, finally succeeding in getting the bag down the basalt incline to the water and then into it, where it became a little bit easier to drag. He stepped into the shallows, immediately losing his footing on the algae covered basalt and falling piggyback onto the bag.
A moan escaped him. He couldn’t get off it fast enough. At last! The bag hovered, gently bobbing on the calm waves. He guided it as deep as he could, walking alongside it on the muddy seabed until only his head was above water. Then he gave it one last strong push. It made a slow roll and half-turn, and teasingly slowly drifted away on the current. He sighed. It was supposed to sink, why didn’t it fucking sink?
Posted by Unknown at 20:00 No comments:

Good Golly! More than a thousand readers for Rays of Light within 6 weeks...I am chuffed, proud, pleased, happy, over the moon, and delighted with you all! And all the rest of you in Germany, England, Ireland, Sweden, Scotland, Morocco, India (yes, you, Smitty), Australia, Austria, South-Africa, Brasil and last but not least my fellow Dutchmen, who think nothing of reading my stuff in English - GREAT, I am proud of you!

Apart from toasting you all tonight with my single glass of red wine (this is for that fellow who is worried that I drink too many, you know who you are!), I thought I'd write down my very own salad recipe. 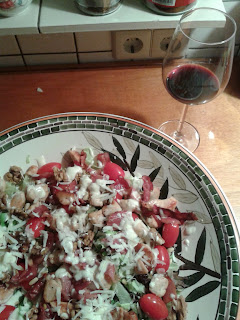 You need:
- mixed greens, made up of bean sprouts, endive leaves, lettuce leaves, chicory leaves, spinach leaves, in fact all sprouts you like except for the Brussels variety (for 4 people I use 200 grams of greens at least, and that is not counting the tomatoes, pepper and cucumber!)
- a hand-full of roasted pine nuts and/or walnuts (I use both)
- 250 grams tiny sweet tomatoes
- pieces of roast chicken (organic happy chickens, please, and how much is up to you. Organic chicken is bloody expensive in my country, so 250 grams is enough for me)
- spices (I use Himalayan rock salt, freshly ground black pepper, chili pepper, garlic)
- approx. 10 black Kalamata olives (hey! Greece!)
- fresh Parmezan cheese, in slivers
- you may add a couple of hard boiled eggs, but that is optional (happy...you know the score)
- 1 cucumber (in cubes)
- a bell pepper (red, green, orange, yellow, whatever colour you like)

Start by quickly spicing and roasting the chicken (I use coconut butter for this). Let it cool off a bit. Then take out your loveliest salad bowl (large! This is a large salad!) and put in everything else (hah! This is the kind of cooking I prefer - no fuss), put the chicken on top and end by grating your Parmezan cheese on top.

Now; the dressing. I usually make up an easy one by mixing a couple of spoon-fulls of organic mayonaise with the juice of half a lime and some finely chopped parsley. But I've been known to use finely chopped dandelion leaves instead of parsley(not too many, they will make it too bitter). Chicken and lime is a perfect combination. But you can use your own dressing, as anything goes, really. As long as it doesn't clash with the olives. 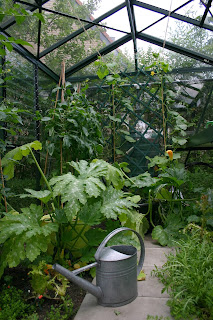 This is our greenhouse in Summer, b.t.w. Notice the Rucola on the right, it was growing rampant! The kids were complaining of a Rucola overkill.
Posted by Unknown at 16:15 2 comments:

Travels with my dog - or: I Want the Large Dog Bed!


Our Gina is the worst traveller you can imagine.

We believe it is her past; she was adopted 8 years ago from Istanbul, and travelled in the back of a Jeep from the airport in Germany to our country (a journey of some hours).
She has been violently carsick ever since. Even looking at the car makes her gulp and retch. Actually putting her in a car, any car, is asking for it. She will empty her stomach before we have turned the first corner of our street (10 meters from our house). So after the first couple of disastrous efforts of taking her along on our trips, and trying every trick in the book and then some, we gave up. Whenever we go somewhere, she stays at home with a sitter, or one of us stays at home with her.

Zita
But this time we decided we would try taking her with us, as we knew her pal Zita would come along as well. Zita is a 12 year old Golden Retriever, and the gentlest goofiest dog imaginable. The two dogs would travel together in the back of our van, and hopefully Zita's relaxed attitude would influence Gina. But I took a mega load of kitchen towels, just in case.

Zita's owner has a more chic taste in doggie furniture than us; we have a wicker dog basket, one of those old fashioned ones that starts to pulverise after a couple of years. Zita on the other hand sleeps on a fancy expensive dog bed. Both items were put in the van, all our bags were covered by a plastic sheet,  and the dogs were told to stay. We then kept our fingers crossed.

She adored that bed!
Halfway on our 4 hour journey to the North of Groningen, Gina had moved out of her basket and on to Zita's bed. Zita then moved into the basket.
When we had arrived at our destination, we put the basket and bed in front of the  fire and walked the dogs. On their return, Gina took one look at the bed, and confiscated it.
She took relaxation to new heights. Zita didn't even try to reclaim her bed, she simply collapsed next to it.
Why didn't we think of this before? We could have taken our dog along all these years...all we should have done was take the fancy bed. And Zita.
So we had a really nice break. Walked around Eenrum and Groningen with the dogs. Took them to restaurants. All without a hitch. The only thing was that Zita, an old lady after all, needed to pee a couple of times a night. She barked us awake.
Gina didn't even blink.
Posted by Unknown at 23:48 No comments:

What are your New Year's Resolutions? 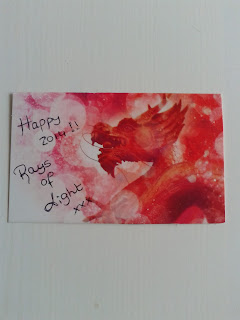 Keeping strays...or How a Dog from Istanbul Entered our Lives. 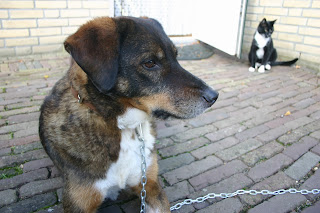 And she's not very friendly to other dogs. Or other people. In fact, she is very effective in keeping people out of our garden. Hence the chain, but we've now put a new fence around the garden, so the chain is in the past.
The woman who runs the dog obedience school (we got our two certificates, oh yeah we did!) called her a traumatised Turkish lady. But she is our lady.